Georgie Kelly is a man accustomed to seeking out challenges.

As a professional footballer and UCD environmental masters student, Georgie is on a mission to achieve, both on and off the pitch.

Georgie is one of a growing number of high-profile athletes, using their platform to raise awareness of critical social and environmental issues.

The exploration of Georgie’s journey from League of Ireland to Rotherham United’s ascent into the English Championship is compelling enough, but equal focus was given to his views and perspective on the climate crisis.

As the article notes “A master’s degree in Renewable Energy and Environmental Science opens a conversation that flies high over the usual footballer’s head.”

What were his key messages?

With his upbringing in rural Donegal, Georgie has an understanding of the key challenges for Irish agriculture, but sensitivity also around the people-based impacts.

In rapid order, he offers his considered view on a number of key considerations::

Georgie ends on an upbeat note:

“I know there is a lot of work to be done with the strength of the national grid and we need to push more policy to encourage more offshore wind.”

“But in 10, 15 years, I think Ireland could be a real hub for renewables, like wind energy and hydrogen.”

The athlete’s platform for impact

Remarkable from an Irish perspective, Georgie’s comments echo the approach of trailblazing athletes across the globe using their platform to drive critical social and environmental conversations.

With rapidly expanding socially-driven influence and impact, one can expect this to increase exponetially in the coming months and years.

For Georgie’s full story, the Irish Times article is well worth reading.

To learn more about the positive role athletes are playing around sustainability, you can also get in touch with us at info@impact3zero.com. 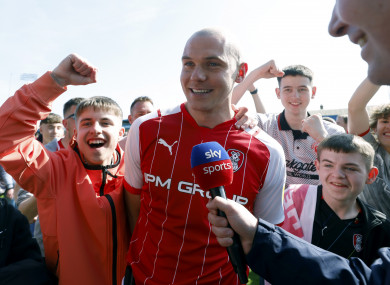